New Year, new FTP! I wanted to make sure I didn’t let my fitness fall too much over winter so I decided to embark on a four-week FTP Booster programme on Zwift. The idea was to get the triple benefit of my first ever bit of structured training; something to keep me occupied and consistent over winter, when I would be relegated to much more boring indoor training; and to hopefully increase rather than merely maintain my fitness. It went pretty well!

First off, let’s take a quick look at what ‘FTP’ even is.

The benchmark for a cyclist’s ability is their Functional Threshold Power—the power, in watts, that they can hold for an hour. The key here is that it’s a combination of both raw power and endurance—it’s the maximum power that a cyclist can produce and sustain for 60 minutes.

What Is a Good FTP?

Honestly, it’s hard to say, but my current FTP puts me in a grey area somewhere above an amateur cyclist (3w/kg) but a way below a professional (6w/kg). It is claimed that a 4w/kg FTP is comparable to a sub-three hour marathon.

Robert de Castella once said that the sub 3 hour marathon was the difference between a runner and a jogger. So it is that many club level cyclists have the goal of being able to achieve a functional threshold power (FTP) of 4W/kg.

This all becomes far more relevant when you begin to factor in riding uphill. On the flat, all things being equal, a rider with a higher absolute FTP will be faster. The moment you start pointing uphill, things change. A heavier rider is, naturally, at a disadvantage, unless they can put out the same or higher w/kg as a lighter rider.

My strategy was to do both: lose weight, being careful not to lose muscle mass, while also improving my sustained power output.

For this, I leaned heavily on help and advice from Chris, my personal trainer. Chris isn’t a cycling coach, but he has been strength-training me since July 2019 and he’s become a huge part of my general mental and physical health, as well as a true friend. He’s been telling me off for losing too much weight lately, but he’s also helping keep up my strength. If you’ve ever considered getting a personal trainer but don’t know where to start, start with Chris.

Your FTP Is Your FTP

One of the most important things to know about your FTP is that it isn’t something you can influence directly. It’s a measure of your fitness, so while everyone would like a high FTP, it’s a symptom of your fitness and not a goal in itself.

Consider weight loss. You might have a goal to drop from, say, 95kg to 85kg. While this is something to aim for, stepping on the scales only lets you know how you’re doing right now. There’s nothing you can do during the weigh-in to ‘do well’—all of the work has been done already and this is merely a measurement of it. The number is a reflection and not a focus.

All of this to say that the true value of FTP is in its ability to measure your fitness at any given time, and aiming for a particular FTP is, to an extent, putting the cart before the horse.

But! That doesn’t stop people using it as a vanity metric—everyone wants to know everyone else’s FTP, and if yours is good, you certainly want to tell everyone what it is! And while you can’t game the test itself, you can have goals and targets to aim for, which is what I ended up doing about three quarters of the way into my FTP Booster.

On New Year’s Day, I was considering what bike riding might look like for me in the coming year. I’m not one for New Year’s Resolutions, but given how big a part of my 2020 cycling had been, I wanted to do something a little more deliberate with it. It’s also pretty timely in that, owing to the weather, most cyclists’ fitness wanes over winter.

Whenever I can, I try ride with my pal, Nick. He’s lighter than I am, but a strong rider who, at the start of the programme, shared an identical watts per kilogram to me. He also loves a challenge, so I text him asking if he fancied taking on this four-week FTP booster plan with me. It was a yes, so we decided to begin week one on the first Monday of January.

It’s not mandatory, but I wanted to do a new FTP test before I embarked on the training programme so that I had an accurate benchmark for improvement. I tested at 305 watts, which was my then-highest FTP by a mere 3 watts. This gave me a 3.7w/kg relative FTP.

The plan takes your current FTP and bases each session around percentages of that figure. This means that even though Nick and I had different absolute FTPs, we both suffered the exact same amount.

I hadn’t embarked on the booster programme with a goal—I just wanted to do some structured training with the hope of at least some increase. But toward the end of the 28-day itinerary they threw in a six- and a 10-minute max-effort free ride. Basically a shorter version of the 20-minute test to help you prepare for the real thing.

My numbers for the six-minute test came back surprisingly favourable: 404 watts for six minutes! This put me at 5w/kg on the day, which was far more than I would have ever expected from myself.

Three days later, my 10-minute test came back at 386 watts, which made for 4.7w/kg on the day. The decay from six to 10 minutes was 18 watts, which was interesting to know but also of very little use to me. The decline isn’t lineal as a 20-minute test is a very different beast to a 10-minute test to a six-minute test, so extrapolation is virtually impossible.

To the best of my understanding, a 20-minute test is physiologically a whole other realm to a 10-minute test, which is why you can’t choose to just do a shorter test and extrapolate. Which is a shame.

It was around this time that I realised that perhaps I should set myself a target for the main test. A sensible step up would be from 3.7w/kg to 4w/kg. My weight hovers anywhere between 81–83kg, so at my heaviest (which I haven’t hit for weeks now), I would need 83 × 4.0 which equals 332.

So now, my target on the day—if I ended up weighing in at my heaviest—would be 350 watts. Remember that number. 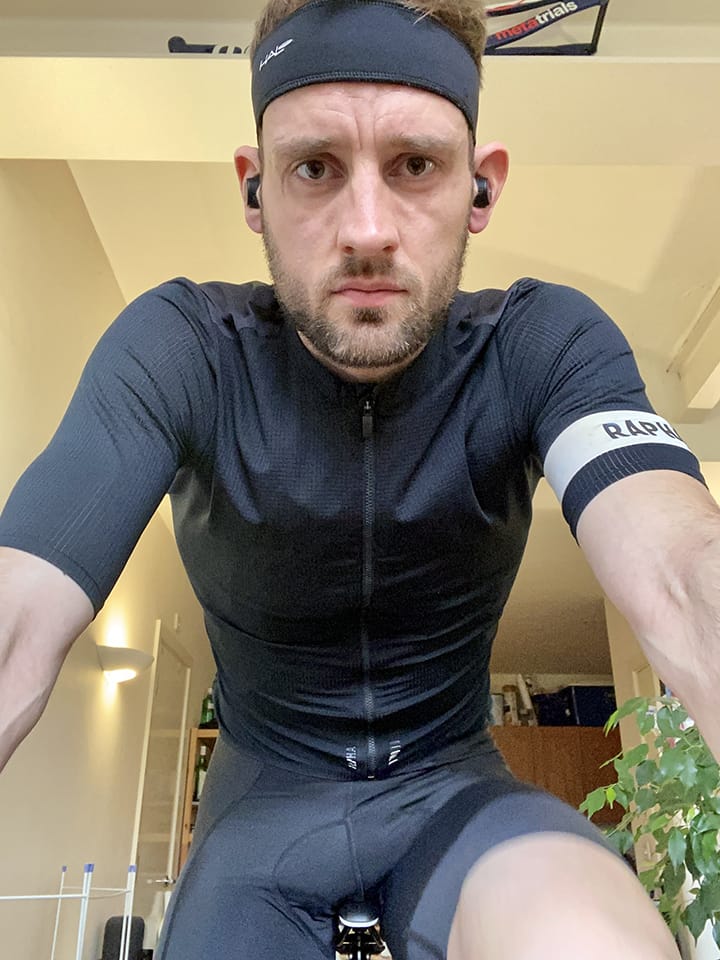 If you’ve never done an FTP test before, I hope you never have to. Sincerely, they’re the most brutal 20 minutes of your life. The idea is that you ride at your maximum effort—not hard, not strong, but your true maximum—for 20 straight minutes. No intervals, no rest, no gradual increase, no let-up. All-out, maximum effort for 20 whole minutes. By five minutes, you’re hurting. By 10 minutes, you can’t see how you can go any longer. By 15 minutes, you’re begging and pleading with yourself out loud. By 20 minutes, you’re delirious.

While you will getter with your pacing and expectations with the more tests that you do, nothing will ever truly prepare you for one. By the end, the goal is for your body to be truly, fully empty. If you could continue on to 21 minutes, you have too much left in the tank. If you could answer a simple maths question, you haven’t gone hard enough.

These photos were taken just before and immediately after the test. In fact, the night before, I had two separate nightmares about FTP tests. 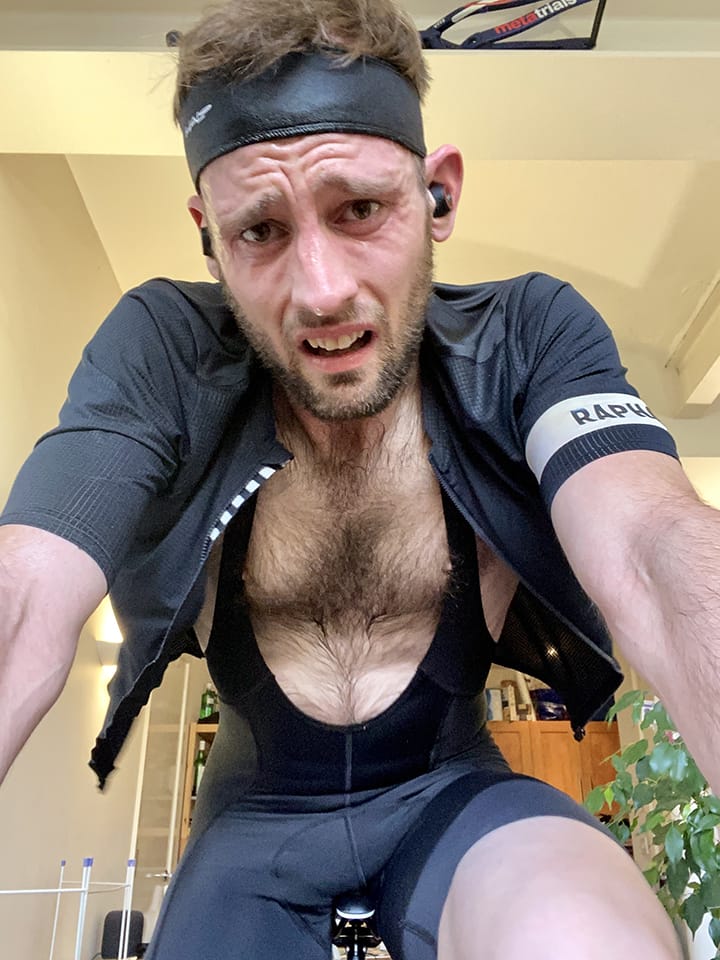 Once you have your average power for 20 minutes, you multiply it by 0.95 to get your 60-minute power.

While the specific test that rounded off the training programme was a 20-minute test, it was flanked by a warm-up, some short efforts to get the legs working, and a warm-down, so in all it was more like an hour and 15 minutes.

The idea of an FTP test is that it’s an all-out onslaught, but it’s consistent. It’s not five minutes on, five minutes off. It’s steady, full-power riding, which means pacing is key. Thankfully, I had the six- and 10-minute tests to inform me, and although I can’t predict my 20-minute result from either, I know that if I can hold 386 watts for 10 minutes, I don’t stand a chance of anything even close to that figure for 20. The benefit of this knowledge is that it stops you going too hard: you can’t really fail an FTP test, but you need to last for the full 20 minute period.

That didn’t really work too well on the day. I went out of the gates a little too hard and soon had to rein myself back in. You can see this in the real-time power graph at the bottom of this screenshot. You really shouldn’t be seeing any green in these. I set off too enthusiastic, too hard, and had to pull it back in a bit so that I could get over the line strong.

Despite the poor pacing, I held 350 watts for 20 minutes. I made my target. With about 30 seconds to go, I was at 349 watts, so I dug as deep as I could for every last fraction of a watt I had left in me and nudged myself over the line at 350 watts exactly.

The plan itself was great. I really enjoyed each session, even the hard ones, and it was nice to just be told what to do each day. A good way to spend an hour, daily, for 28 days. What I find interesting is that none of the sessions were impossible to finish, yet cumulatively they managed to level me up significantly. I’d highly recommend it for both the experience and the potential gains, which brings me onto…

As for the results, I’m over the moon. I’d spoken to Stu when I was part way through the first or second week and told him that I could never see myself hitting even 320, so to come away with 332w (after a poorly paced test) has left me really, really happy. An 8.85% FTP increase in 28 days? Yes please.